I was going through one of my favorite blogs a while ago, The Purple Foodie and I saw a homemade version of pickled jalapeños. I was thrilled because I really love jalapeño peppers in a sandwich, a salad and sometimes I just serve it as an accompaniment with the meal itself and that is exactly what I did for the Barbecue party that we had some time ago. Since we had kids over, I couldn't spice up the salads as much as I normally do. So I left out the green chillies and simply served a bowl of pickled jalapeños along with the meal. That way anyone who wanted a little extra punch simply added some to their salads. Anyway, I made a jar of this some time ago. They were super yum, and if say so myself, so much better than the store bought variety. The best part is that I know exactly what is in the jar, since its made from scratch. Also, the peppers taste better with time, thats if it lasts that long. The recipe is simple and easy and can be made way ahead of time. If you love pickled jalapeños as much as I do, give this a try. You won't regret it. 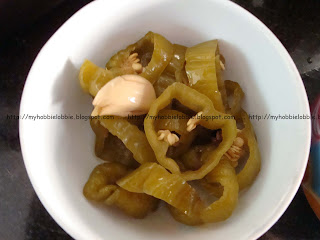 Place the sliced jalapeños in a glass jar.

Place the rest of the ingredients in a saucepan. Bring to a boil and simmer for about 5 minutes.

Let the brine cool a little but while its still hot pour over the jalapeños in the jar and let it rest for a few hours.

Cove the jar and shake a little to distribute the spices evenly.

I keep the jar refrigerated so that it lasts longer.