For months together I've been in awe of all you wonderful bloggers out in blog land who bake their own bread. Seriously, I've not done much in this field. Somehow, yeast has always intimidated me. But somehow, everywhere I looked, folks were baking their own bread. So this weekend, I decided to take the plunge and try my hand at a brioche loaf.

What can I say! I was really anxious while preparing the dough even though the process was fairly simple. But it did rise well while resting so I calmed down a little and continued. I had my fingers crossed and was seriously hoping the bread would turn out okay. I was going to serve it up for dinner, with almost no backup, should it have failed. All my hopes were pinned on it. I was thrilled to pieces when I took it out of the oven. I almost did a little dance with the hot loaf tin in my oven mitt covered hands. Who am I kidding? I did a little dance! I had finally conquered the mighty yeast; at least for now. The loaf had risen beautifully and was so tasty, I could eat it plain. To say that the mass produced, store bought bread pales in comparison, is an understatement.

I love being able to bake my own bread and not having to rely on what available at the stores. There are so many different types of bread I've seen on diiferent websites and blogs, I know for sure, I will be baking my bread more often.

I didn't change the recipe much, since this was my first attempt, except for using salted butter instead of unsalted and adjusting the amount of salt used. However, I did alter the method a bit. What follows is the method I used and its what I'll stick to, since I got such great results. 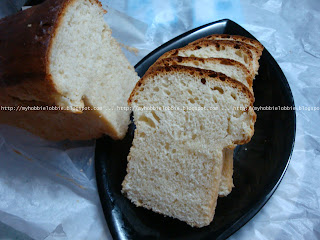 Heat the milk to get it warm but not hot. (If its too hot, it'll kill the yeast and if its not too warm, the yeast won't activate. The original recipe suggests 110-115ºF, I just went by feel). Pour the milk into a bowl. Add the sugar and sprinkle the yeast over it. Cover and leave it to stand for about 10 minutes or till frothy.

Pour this mix into a large mixing bowl. Add the eggs 1 at a time and using an electric whisk beat between each addition.

Add the butter and salt and beat well again.

Add a cup of the flour and beat well.

Add the rest of the flour and mix till is it well incorporated. At this stage I started mixing with a large wooden spoon.

Once this is done, turn out on a lightly floured surface and knead well for about 5 minutes till the dough becomes smooth and elastic. This is a fairly sticky dough, so lightly flour your hands before needing and curb the urge to add more flour. Trust me, you don't need it.

I lined and greased a loaf tin, leaving a little overhang of the baking paper. Transfer the dough to a 8 1/2-9" loaf tin. (I had only a 7 1/2" one so I used that, which is why the top of the loaf looks the way it does.) Cover with a clean kitchen towel and leave it to rise for an hour.


This recipe is linked to -
Savory Sundays
My Meatless Mondays
Bake with Bizzy
Mangia Mondays
Mouthwatering Mondays
Posted by Trisha at 6:24 AM Trisha
Mumbai, Maharashtra, India
I dabble in a wide variety of stuff ranging from cakes, cupcakes to floral arrangements and giveaways, all handmade and made to order. Do stay a while and browse through!