Sometimes, when I'm just not in the mood to cook something elaborate, I like to opt for easy and quick meals with pack maximum flavor with minimum fuss. I'd rather have something home cooked than have to order out. Once such meal is Nigella's Sesame Peanut Noodle Salad. Its not just a salad, but a slightly larger portion can make it a meal in itself, and a very satisfying one at that.

The dressing is super easy to make and the only actual cooking involved in boiling some noodles. You can pretty much alter this salad to accommodate the salad veggies that you have at hand. In the past I've also added some leftover grilled pork and it was fabulous. I think shrimp or even chicken would make good additions to this salad. This time around, I kept it vegetarian. 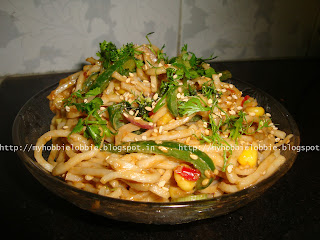 1 packet noodles, boiled, drained and cooled
A handful of bean sprouts (I didn't have any so I used corn kernels. Learn how to make you own bean sprouts here.)
2 spring onions, finely sliced (If you don't have any, use 1 finely sliced onion)
1 green pepper, sliced (the original recipe calls for red pepper)
4 tsp white sesame seeds
4 tbsp fresh coriander leaves, chopped

Mix all the ingredients for the dressing together.

Toss all the salad ingredients in a large bowl reserving a little chopped coriander and some sesame seeds for garnishing.

Add the dressing and toss well to make sure that the noodles are coated well.

Garnish with some of the chopped coriander leaves and sesame seeds and serve.

Any leftovers can be refrigerated and had the next day as well.


This recipe is linked to -
Full Plate Thursday
A Little Birdie Told Me
It's a Keeper Thursday
Weekend Potluck
Posted by Trisha at 4:39 AM