I've been craving some good old Indian food, and not just anything, but something along the lines of Chicken Tikka or Tandoori Chicken. So I picked up a 'heat & eat' version of Chicken Tikka at the local supermarket and let me tell you, it was awful, just awful. It looked like the real thing, but tasted nothing like it. It was so disappointing. I knew the only way I was going to get a decent version was to try making it myself. Now I don't have a coal fired barbecue pit yet, so I would have to make do with the oven. Next, I looked around for a while on the internet till I found a recipe that looked and sounded interesting enough to try.


I marinated the meat in the morning and baked it in the oven that evening. Now I know you're thinking, isn't Chicken Tikka usually in the kebab form, cubes of boneless chicken meat on a skewer? I had a couple of pieces of chicken leg (drumstick and thigh attached) in the freezer and I decided to use that. The marinade is a Chicken Tikka one, but the cut of meat used is more a Tangdi kebab (Tangdi = leg). I loved the way this turned out. The meat actually had a little char on the outside but was moist and tender on the inside. That marinade was fantastic, the flavors were perfect. I was thrilled with the result. Now I don't have to rely on the store bought stuff.

My husband loves a good tandoori chicken, or kebabs of any sort really. He was so excited to see this on his dinner plate. He considers himself a connoisseur of kebabs, of sorts and he loved it. So I know I'm onto something good here. This recipe is a keeper. Serve this with some naan and a raita and treat yourself to a good homemade Indian meal. 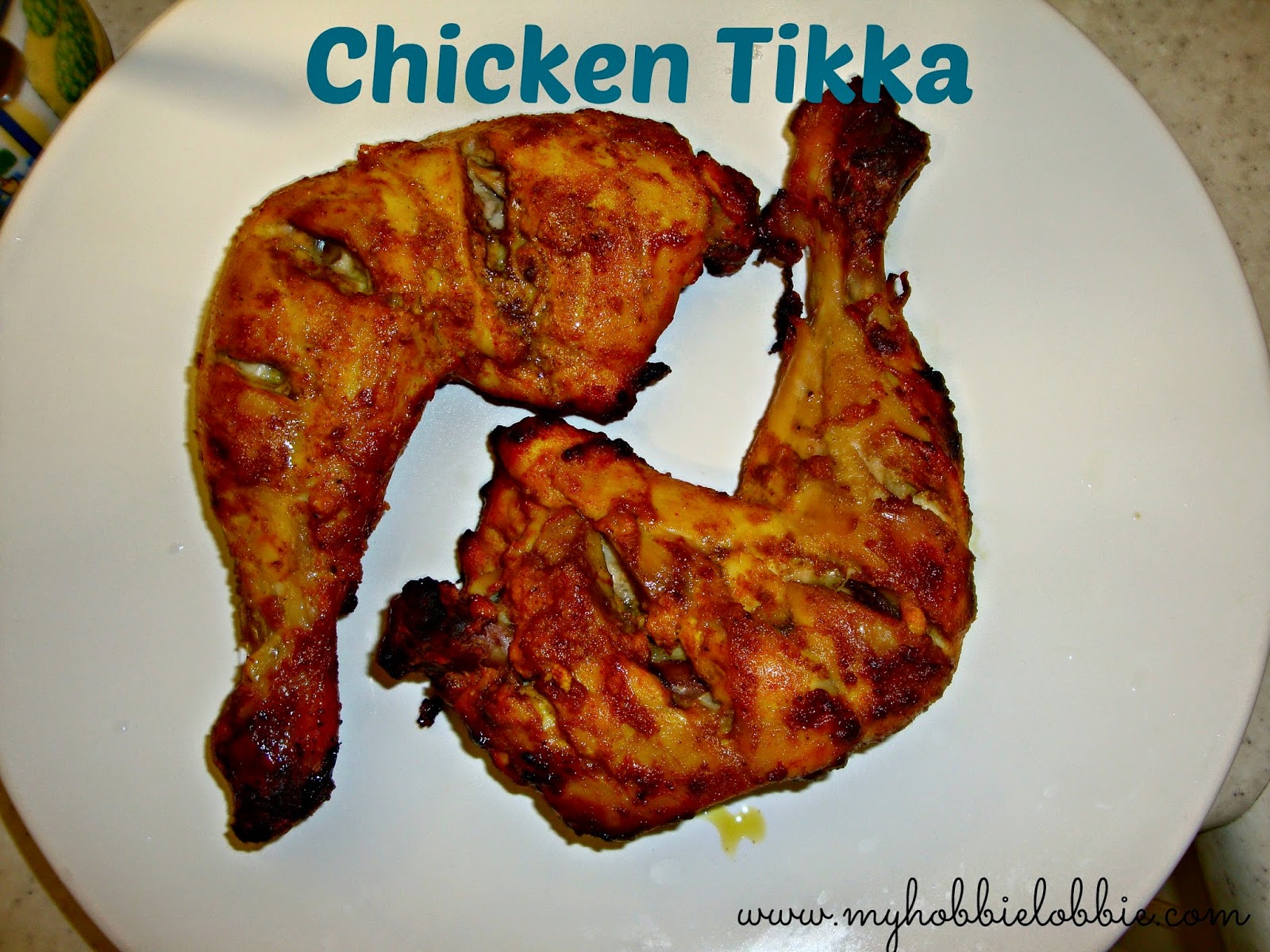 Mix all the spices with the yogurt.

Make a couple of deep slits with a sharp knife in the thigh and the drumstick on both sides. Marinade the chicken with the yogurt and spice mix. Cover with some cling film and leave it in the refrigerator overnight.

Discard the excess marinade and place the chicken on a foil-lined baking tray, for easier clean up. Bake for about 20 minutes. Baste the chicken with a little olive oil.

Turn over and cook for another 15-20 minutes or till the juices run clear (the time will depend on the size of the chicken pieces), when the flesh near the joint is pierced with a knife. (The internal temperature of the chicken should have reached 165°, if you are using a meat thermometer). Baste midway if needed.

Notes:
1) If you are using boneless chicken cubes, and you intend using bamboo skewers, soak the skewers in cold water for about half an hour to prevent it from burning in the oven.
2) Also, the cooking time for the cubes will be lesser.