Welcome to this months edition of the Secret Recipe Club. This month I was assigned Claire's blog - Claire K Creations. Claire is from Australia and it is so much fun teaming up with another Aussie blog. She has loads of recipes, posts on local farmers markets and some posts on crafts and gardening that I really enjoyed reading. I must start off by saying I love-love-LOVE Claire's blog. I wanted to make every single recipe I saw. I had such a hard time picking a recipe for this month's reveal. Check out her recipe index and you'll see what I'm talking about. I love Claire's posts on snacks and food that people usually pick up in the freezer aisle that can be made at home and honestly, looks (and I'm very sure, tastes) so much better than store bought. I've bookmarked her recipes for Party Pies, Healthy Savory Mince Pies, Ham Cheese & Chive Quiche and this Ham & Vegetable Fritata to try out soon. Oh, and did I mention that I have a list of other bakes and treats that I've bookmarked too. Thanks for the inspiration Claire! You've found a new follower in me :)


For this months reveal, I decided to try out her recipe for Macadamia toasted muesli. Very recently, I had tried out some muesli with pecans in it and I quite liked it. So I decided to swap in pecans for the macadamia. My next batch will be a macadamia one for sure. I have made muesli at home before. But what I really like about this recipe is that there is no added sugar. It just uses a bit of apple juice for sweetness and moisture. I used a juice without added sugar. It was really easy to whip up a batch. I don't know why I haven't been making my own muesli more often. Just four easy steps and pop it in the oven. 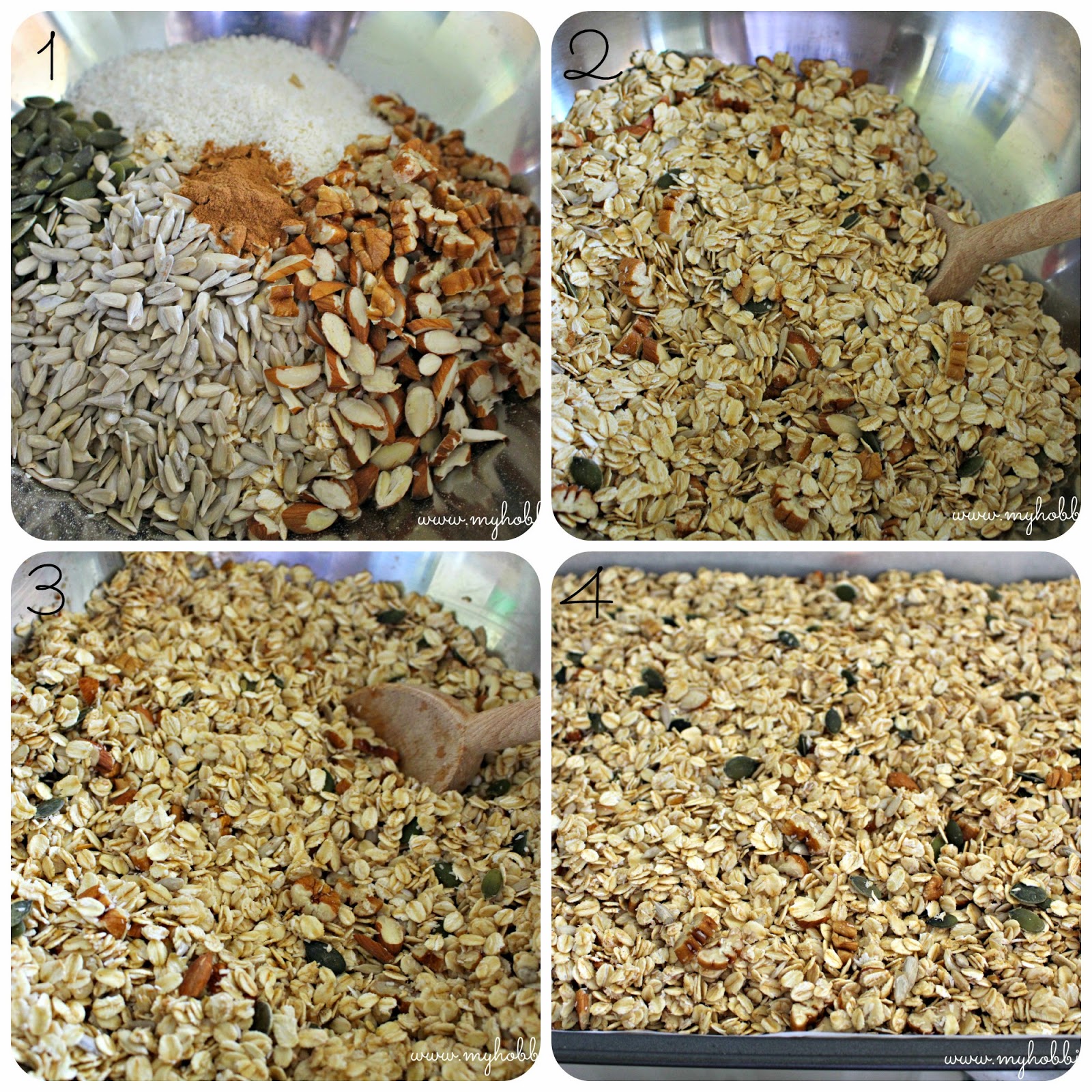 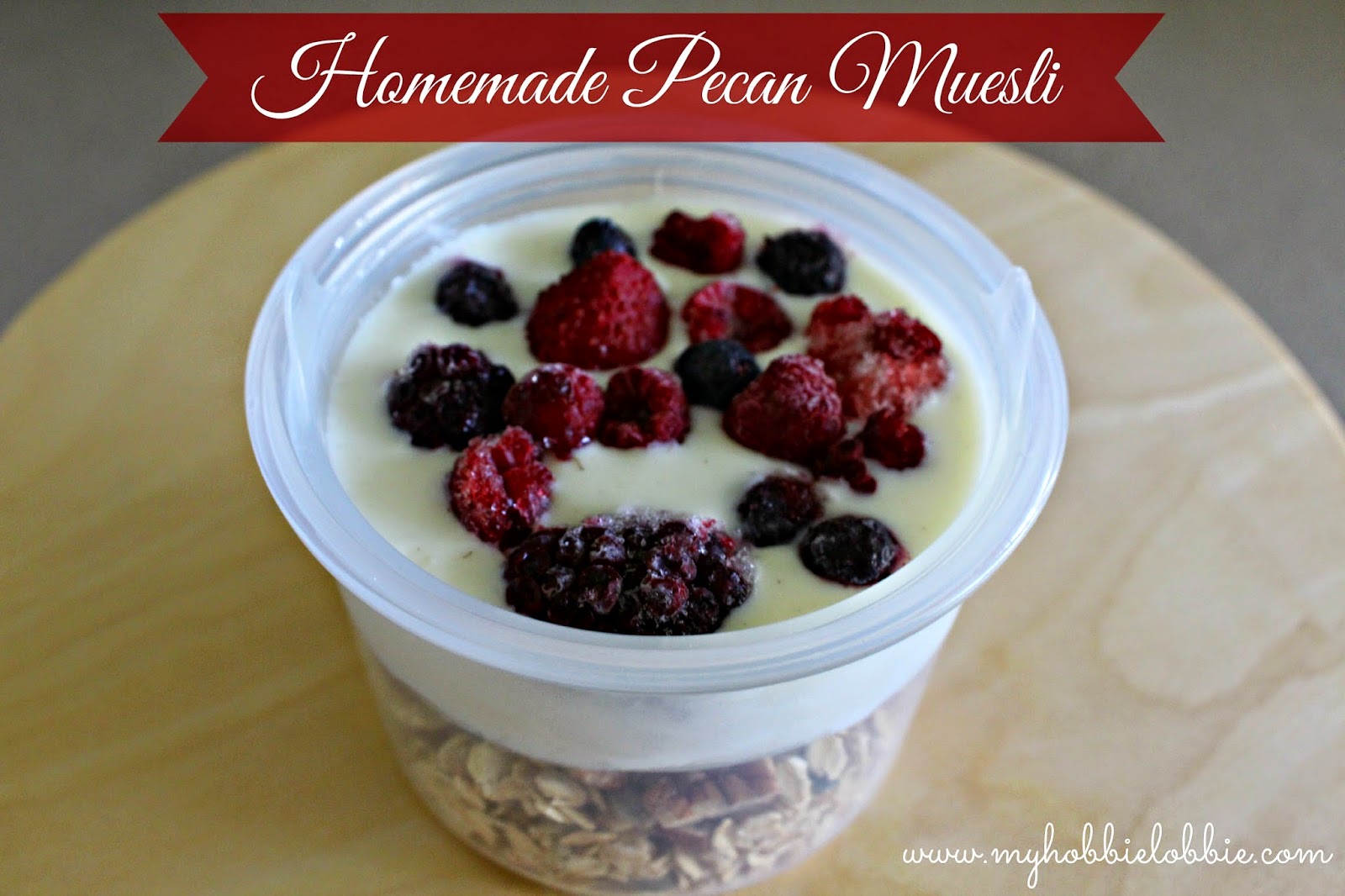 
1. Measure out your dry ingredients in a large mixing bowl. 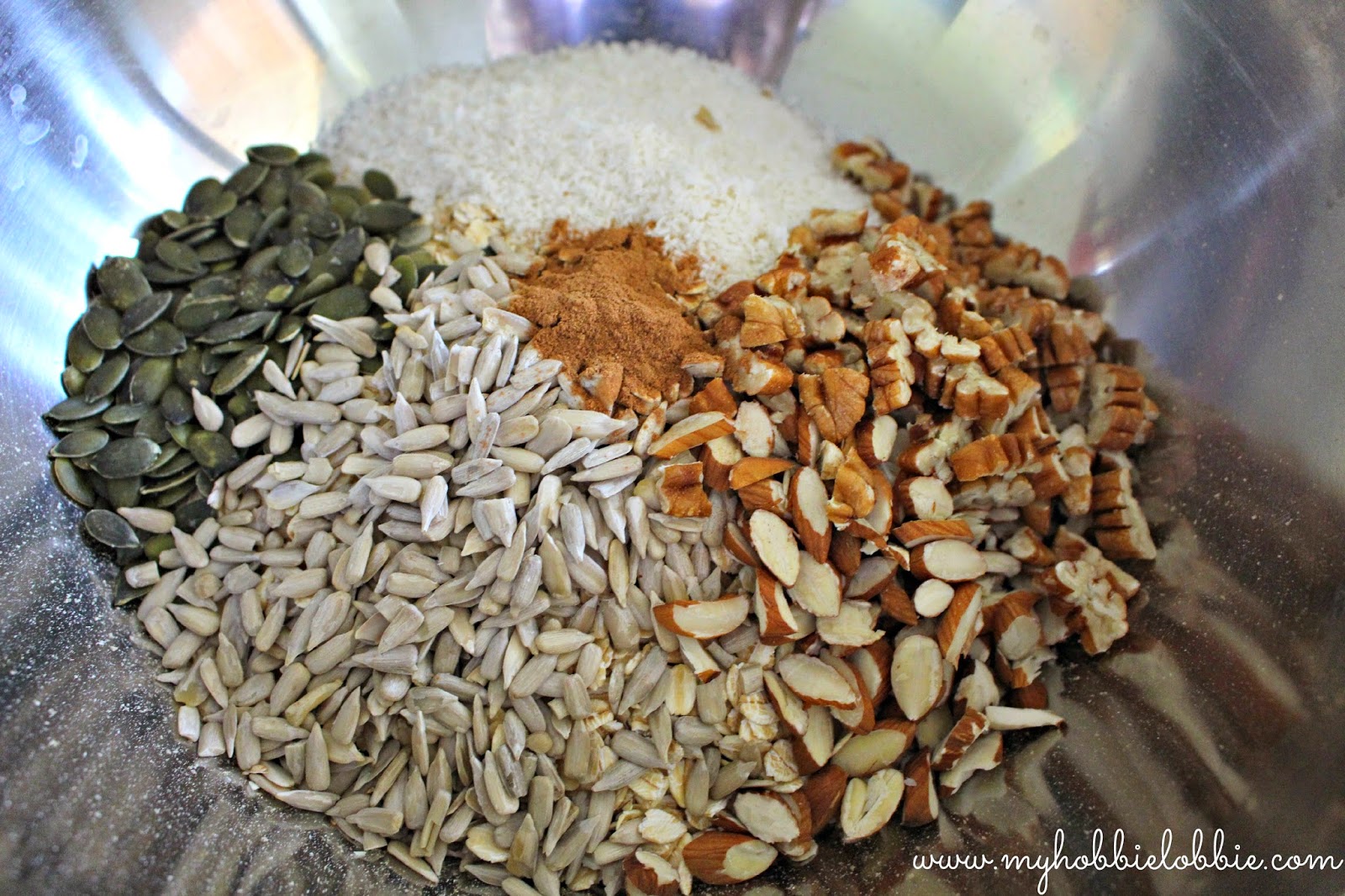 2. Mix the dry ingredients in the bowl. 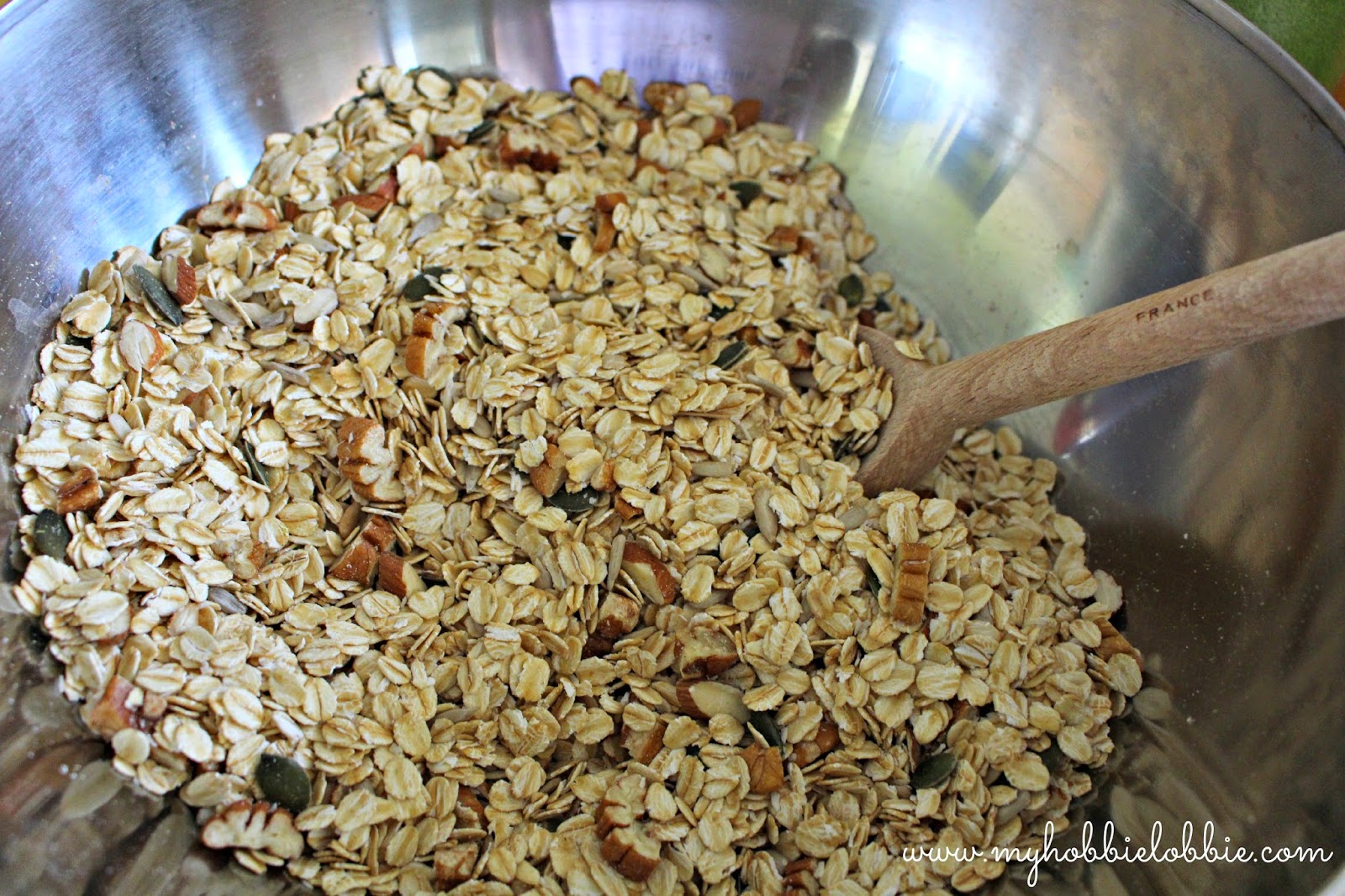 3. Add the apple juice to the dry ingredients and stir through. 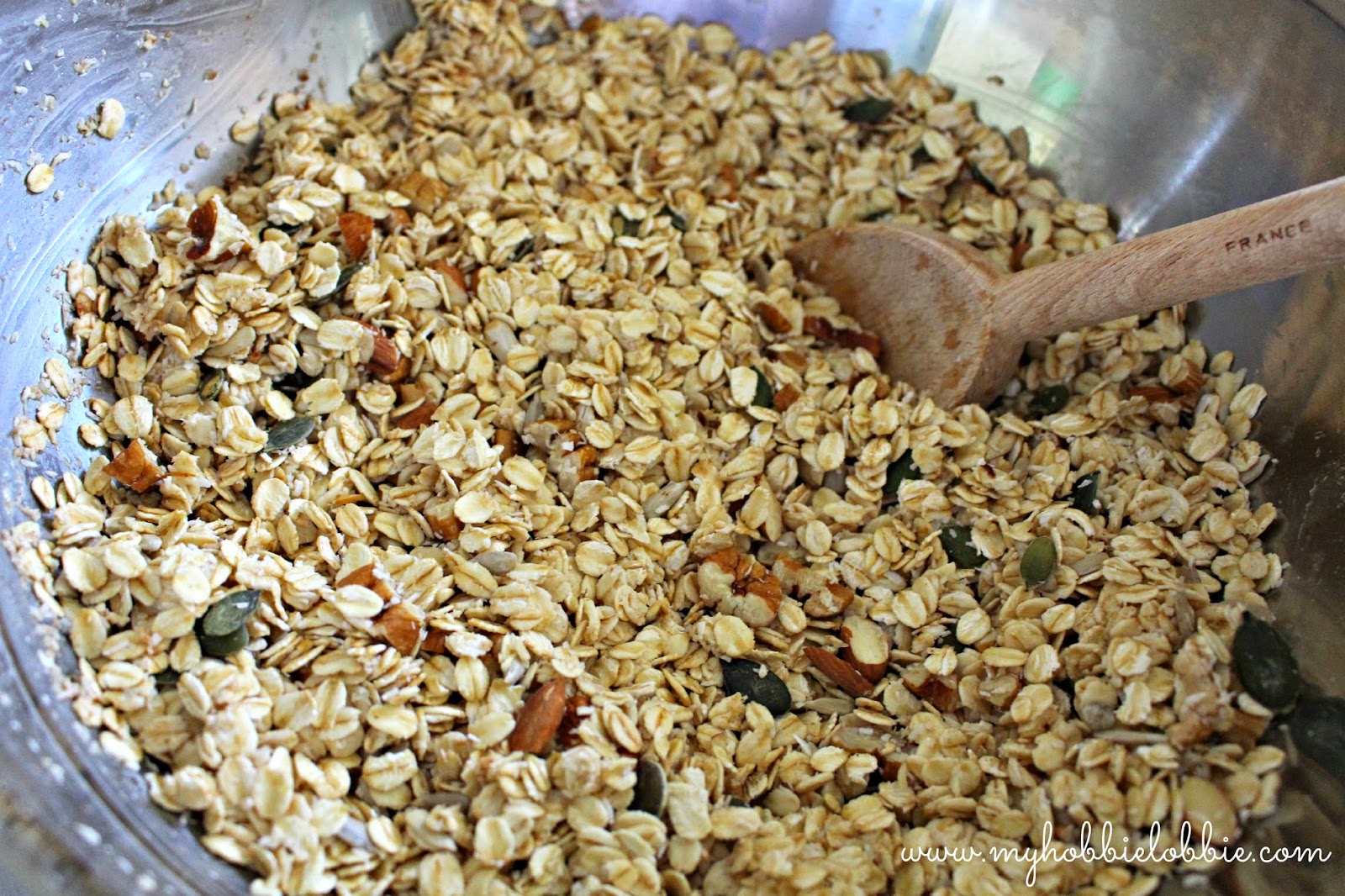 4. Place the mix on a baking tray that has been lined with baking paper and bake @120°C for an hour. Stir through with a fork every 15 minutes while it is baking to make sure the ingredients at the bottom get their time on the top to toast off nicely. 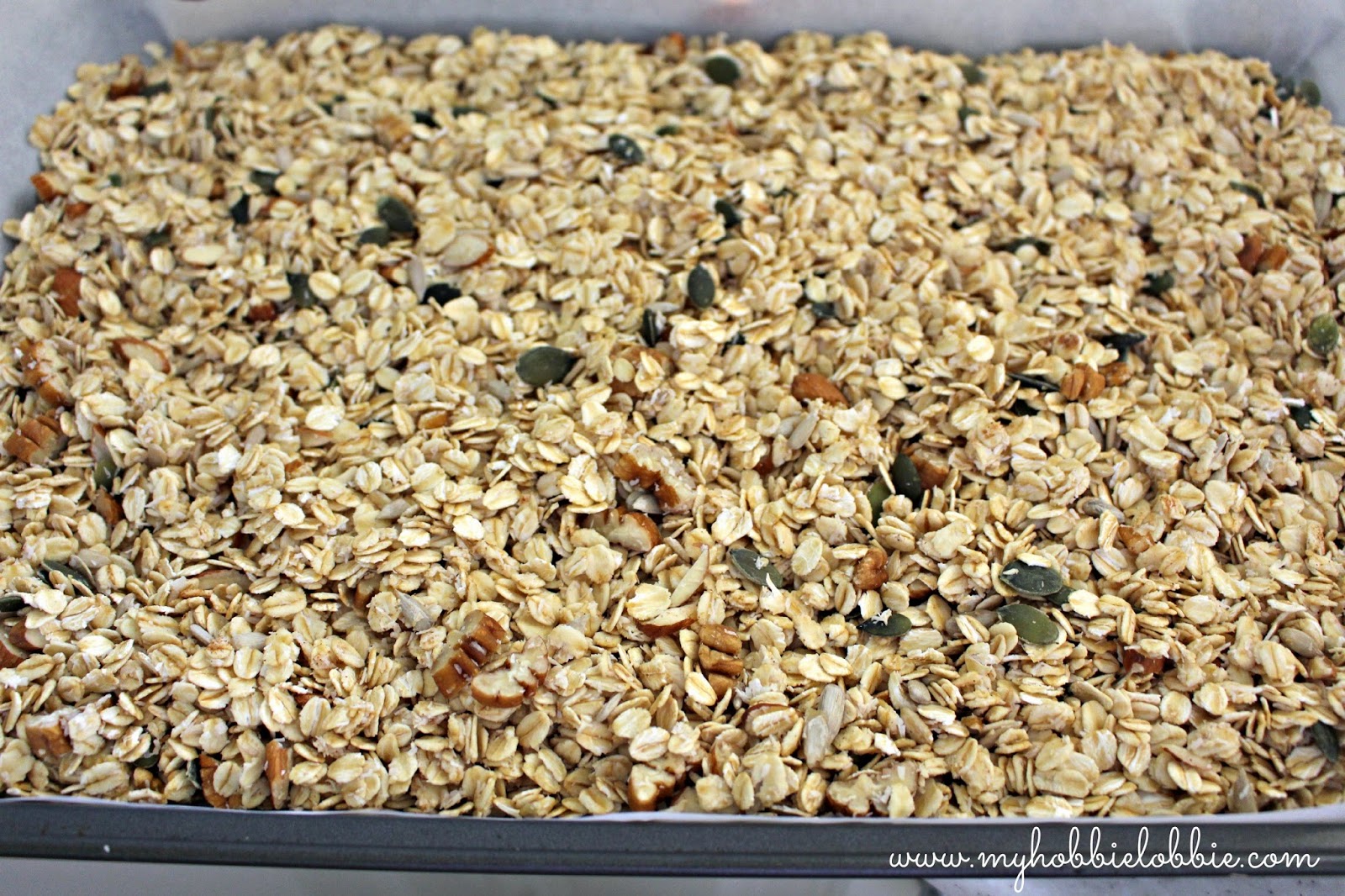 Let the muesli cool down completely before you store it.


A little jar of this homemade muesli prettied up with some ribbon and a little gift tag would make such a nice little gift / hostess gift this holiday season.

For a good breakfast to go option, serve up this muesli with yogurt and some berries. Look at what I found at the store recently; a little Sistema container that lets you keep your muesli and yogurt with berries separate so that it doesn't get soggy. And the little yogurt container has a slot for a spoon too. I'm so glad I found it. I need to pick up one of these for hubby too. 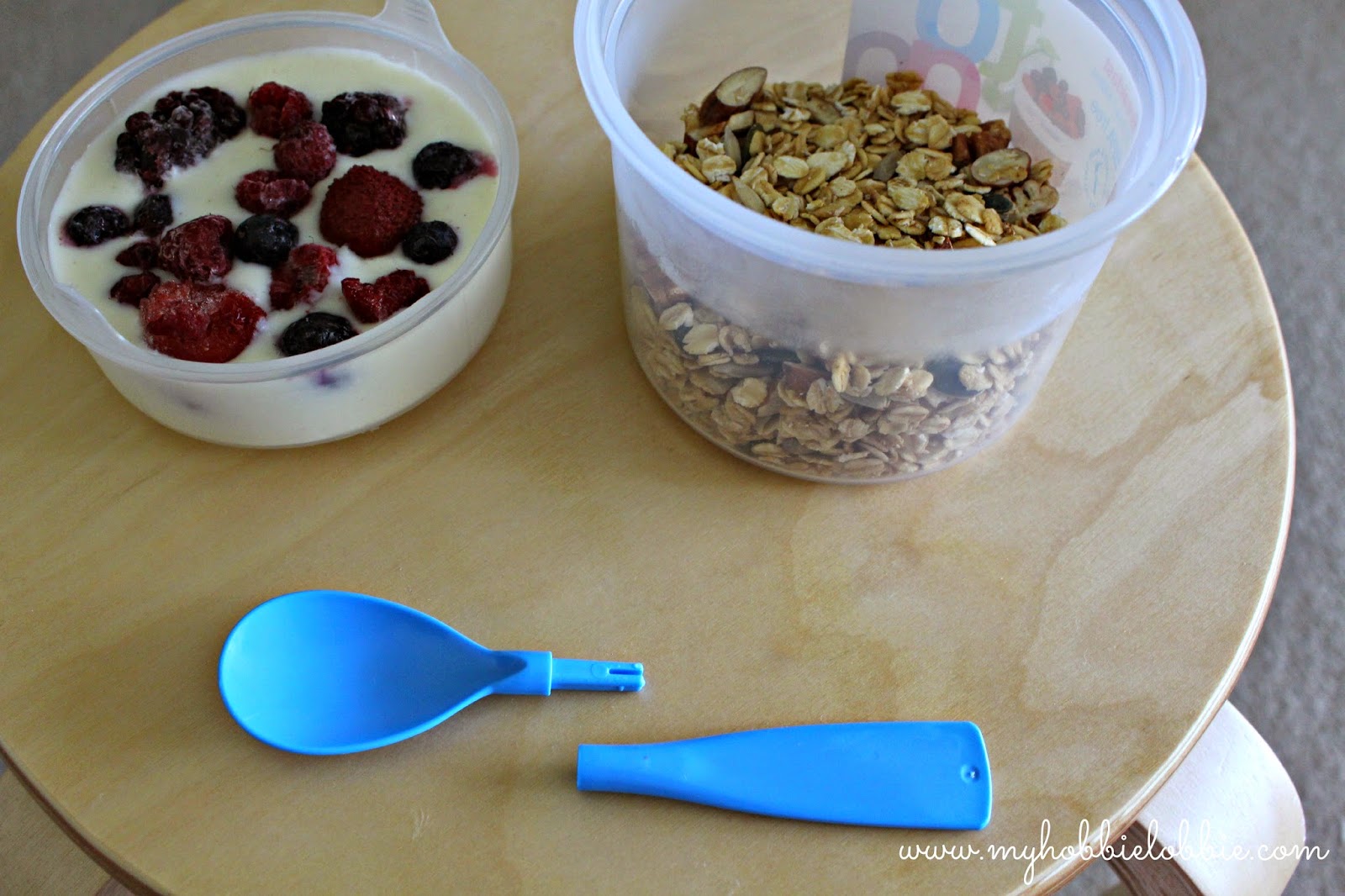 DISCLAIMER: This is NOT a sponsored post. I'm sharing a product that I find amazing with you.


If you'd like to be a part of the Club and join in the reveals, you can read all about it and sign up here.

An InLinkz Link-up
Posted by Trisha at 9:00 PM 12 comments

You're probably wondering why I'm posting an apple crisp recipe in the middle of Spring. Well, you know the last few months have been super busy and I haven't been regular with the posts here. Today, I have a little time on my hands and was looking through some of the pictures I've taken of posts I'm hoping to get done soon and this one jumped out. I realized I hadn't shared this recipe with you yet and I thought it would be a good opportunity to do that. You see, like I've said in the past, I have been cooking and baking, I just haven't gotten around to posting yet.

I know while we're enjoying the slight warming of the weather, most of you are in the middle of autumn / fall and you should have plentiful access to some apples. Now, I've had my share of apple cobblers and pies before, but this little dessert is in a league of its own. The crisp almond topping adds a whole new dimension to the apple-cinnamon mix. Its adds some crunch and pairs with the apples so well, you have to eat it to believe it. In the picture, I've only captured the crisp, but you could serve it up with some vanilla custard or some lovely vanilla bean ice cream.

The only thing I did differently, is I left the skin on the apples. But if you don't like it, you could peel them. Oh yeah, I also left out the nutmeg. This recipe is a sure keeper. I see myself making this over and over again. 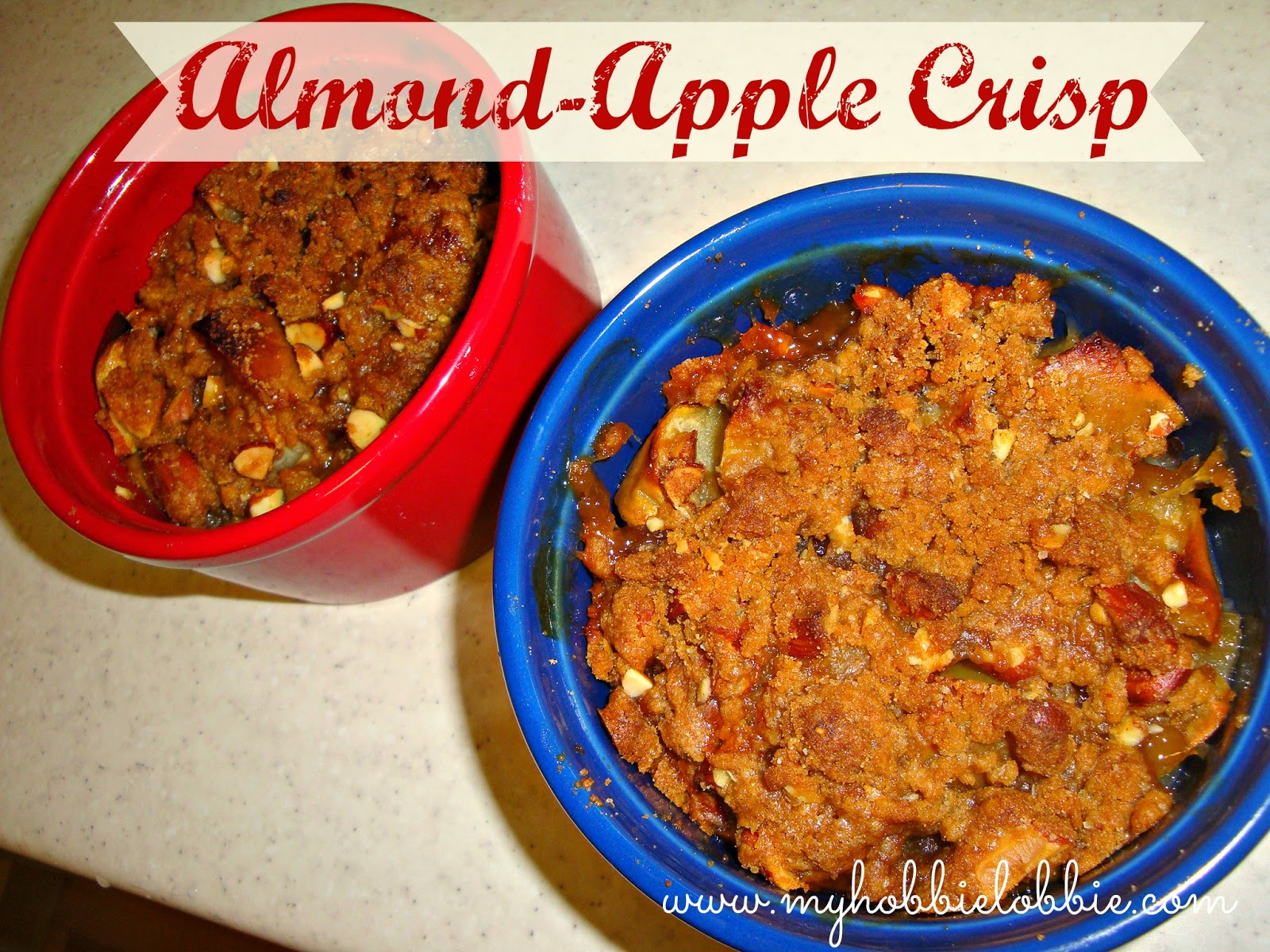 To make the filling -
Stir the cornstarch and the lemon juice in a large bowl till it dissolves.

Add the apples, sugar, salt and cinnamon and toss well to combine.

Pour the mix into and 8" square baking dish. I did that and had some left over so I used a couple of ramekins.


To make the topping -
In a medium bowl, whisk the dry ingredients together.

Rub the butter into this mix, by using your fingers till it resembles coarse crumbs.

Sprinkle the topping evenly over the apple mix.

Bake for 50-55 minutes or until the topping is golden brown.

This has got to be one of the quickest recipes I've come across. Its taken me longer to write up this post than to make this fresh salsa. If you haven't realized by now, I really like my tortilla chips and nachos. You might remember my homemade version from here. Even though tortilla chips are easily available all over the place here in Australia, I somehow still prefer the homemade version. For this post, you'll see a store bought option pictured. I just need a little time to whip up a homemade batch, it is so much better; tastier and you know exactly whats in it.

But today we're here to talk not about the chips, but this really yummy salsa dip. A while ago, I'd picked up a jar from the local supermarket, that claimed to be 'Hot'. I love spicy stuff, so I thought this would really hit the spot. What I love about Mexican food is the spice from the chillies and peppers and the tang from the lemon and tomatoes.  Much to my disappointment, this store bought salsa was neither 'Hot' nor tangy. I knew I had to figure out a way to get my hands on something better. So when I came across this recipe for a blender version of Salsa, I decided to try it out. It was too quick and easy a recipe to pass up. And am I glad I tried this out. The salsa was fresh, packed full of flavor, you can easily adjust the spice levels to your liking. It was everything a good salsa should be. I sure hope you try it out.

The picture doesn't do it much justice. It was fairly late in the evening when it was taken. I hope to get a better picture up sometime soon. 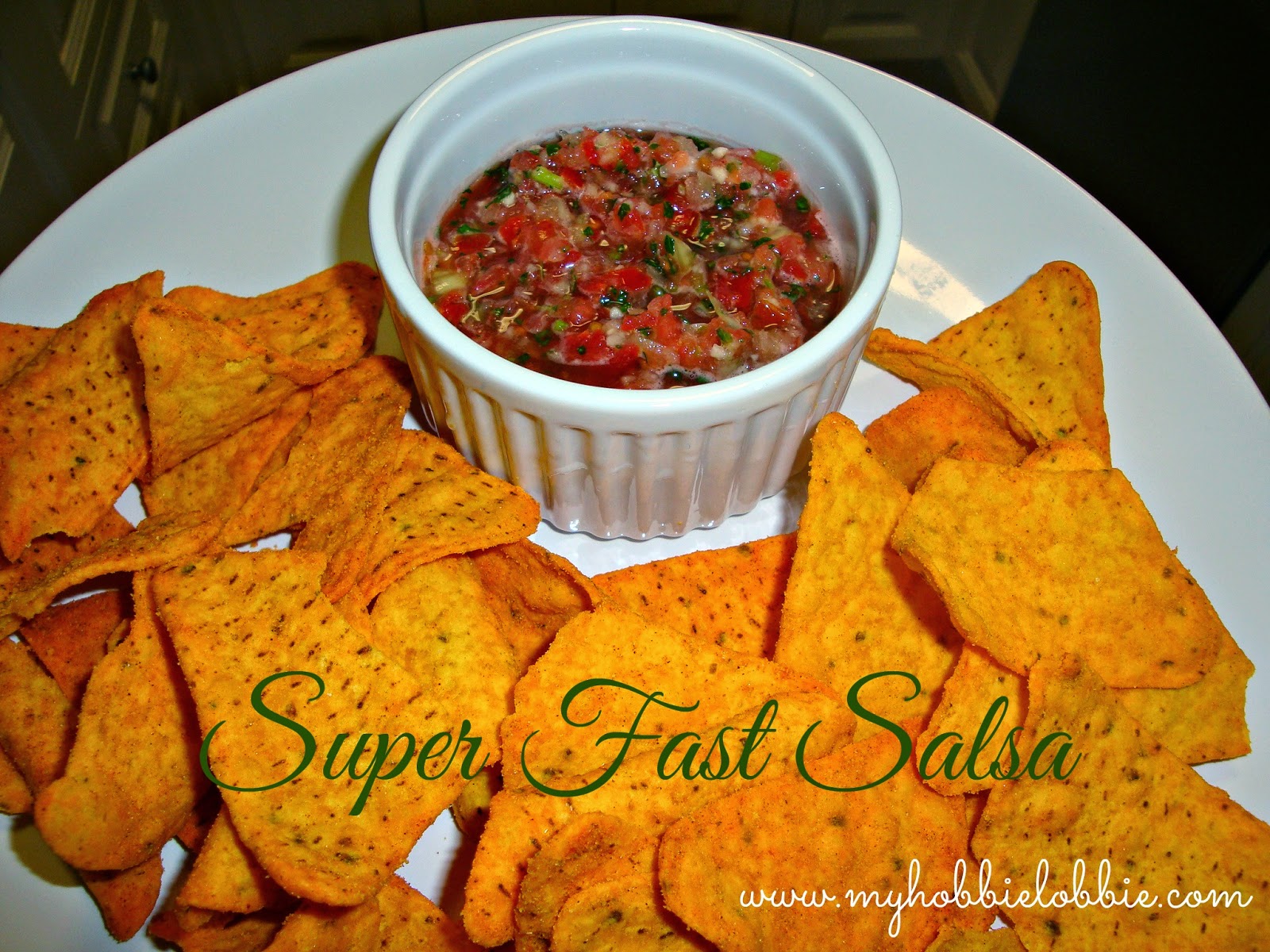 Place all the ingredients in the food processor.

Pulse till it reaches the consistency you like and is combined.

Adjust the salt and lime if needed.

Welcome to this month's edition of the Secret Recipe Club, what we lovingly call the SRC. For those of you visiting my site for the first time, SRC is a fun group of bloggers that come together once a month, and prepare one recipe from a pre-assigned blog and write up a post about it on the reveal day. Its sort of a Secret Santa for food bloggers.

This month, I was assigned the blog, BC Mom's Kitchen. What a fun blog. Anna, aka BC mom is a girl after my own heart. She looks for recipes that are quick and easy to make, without compromising on flavor. That is my food mantra, the kind of food I love to cook. After looking around for a bit, two recipes caught my eye, one was her recipe for Stuffed Chicken Breasts (which I will try soon, I've picked up all the ingredients for it) and a curious recipe called Iced Caps.

With summer kicking in here, I decided to go for a nice chilled treat - the Iced Caps. I've never heard of it called by that name before, but it looked like an interesting twist on the good old Cold Coffee, one of my all time favorites and its been that way for a long time. I've just not had one in ages. I couldn't let an opportunity like this pass me by. I had all the ingredients I needed at hand and chances are you will too. So if you're looking for a nice cool treat, you could be sitting down with a nice cool glass in sheer minutes. While it is simple to make, not to mention quick, don't let it fool you. I've made this a couple of times already and I get the feeling that I will make this a few more times, atleast, this summer. I've made it with and without the vanilla and I like it both ways. It turns out surprisingly creamy, yet not too heavy, with a nice kick of coffee. Thanks Anna, for the inspiration. This one is a keeper in my books.

I stuck to the recipe but I did make a double portion, because I knew my husband would want to try it out too. And try it he did. Let's just say we're really happy to have tried this recipe out. 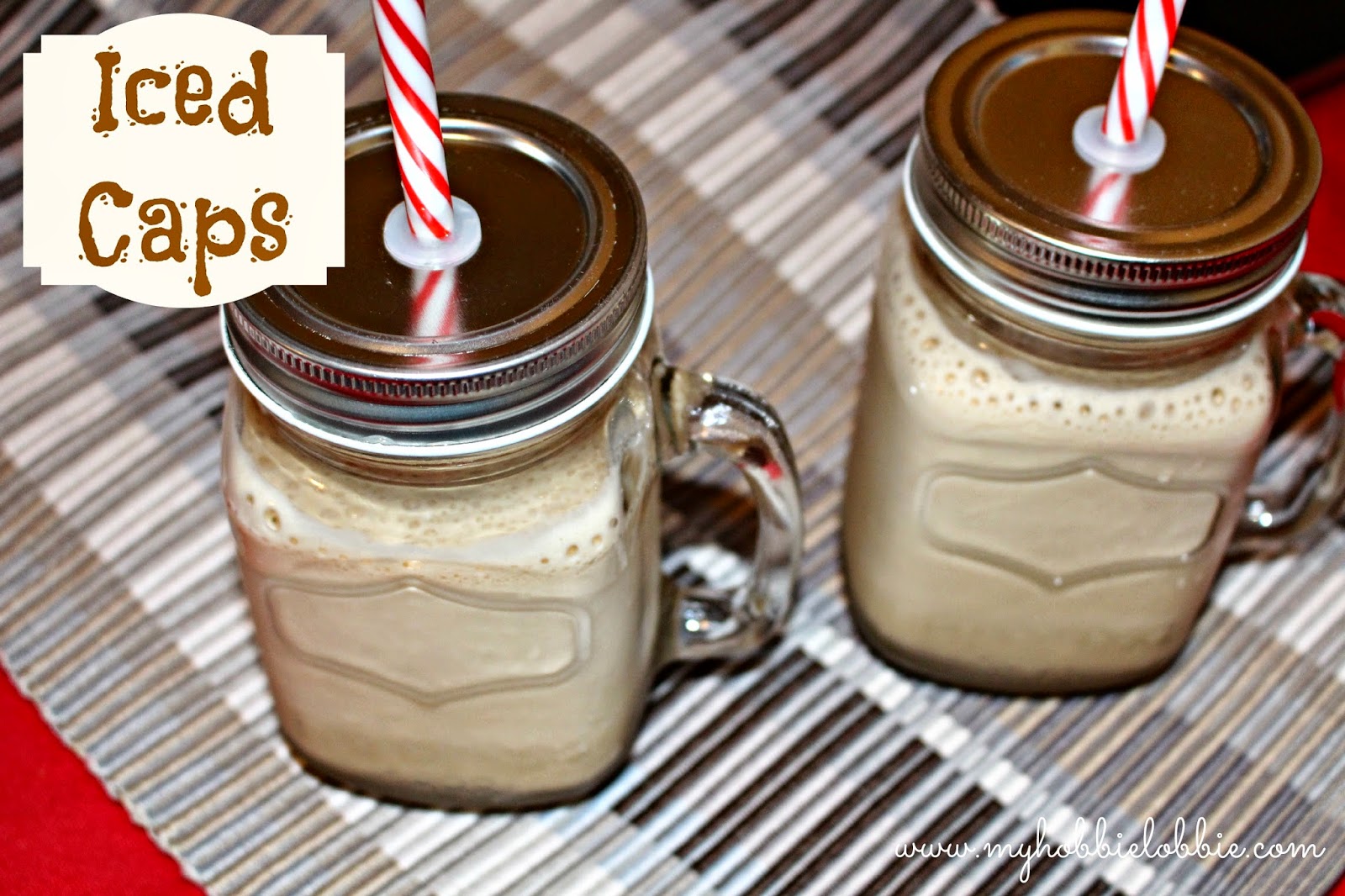 Place all the ingredients in a blender and blitz till the ice has crushed.