Is it too early to be starting with Holiday goodies? Is a milkshake even an appropriate holiday treat? Well the answer is 1) Its never too early to start trying out Holiday goodies and 2) Yes - especially when you live in a place that has a Summer Christmas.

This month for the SRC reveal, I was assigned Nicole's blog, Daily Dish Recipes. I've admired Nicole's blog for years and then somehow in the recent past I lost touch with it. I was so excited to learn that I was assigned her blog this month. Choosing a recipe to make for the reveal was not easy. After shortlisting a few, I was left with 23 recipes and after tossing to and fro between them for a few days I was no closer to picking one. The only thing that helped me decide this month was the weather Gods. We're smack bang in the middle of our first heat wave of the season, and we still have 2 months of Spring to go, Yikes!!! I needed to pick a recipe the would cool us down and would involve little or no cooking. I quickly looked through my shortlist and I was down to 2 recipes - Homemade Fruit Irish Cream Sodas and Gingerbread Milkshakes. I had pinned the Irish Cream Sodas to try a couple of years ago and I fully intend trying it out. But in the end, my love for Christmas won and I went with the Gingerbread Milkshakes. I wanted to have a nice cool drink to serve up around the holiday season. This milkshake was really delicious, I can see myself serving this at other times of the year too. There are just two components to this recipe, making the gingerbread syrup and then blending everything together. Making the syrup was really easy and my whole house smelled like Christmas. The flavours were beautiful, but I will make the syrup stronger the next time, that way I wont need to add too much and will be able to control the sweetness. But its an absolute winner of a recipe. Thank you Nicole :)  I halved the recipe and those are the quantities mentioned below. I made absolutely no changes (except leave out the whipped cream for the topping) and was very happy with the result. 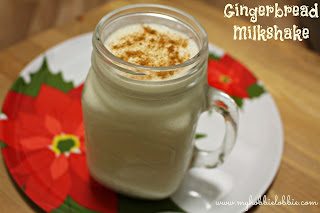 In a large saucepan, mix the water, sugar, ground ginger, vanilla and ground cinnamon and bring the mixture to a boil.

Once it has started boiling, lower the heat to a simmer and let the syrup simmer for about 20 minutes, stirring occasionally.

Store in syrup in a jar as you will have syrup left over.

Pour into glasses and spinkle ground cinnamon on top to pretty it up.

Don't forget to check out what the other Group A members have posted this month.


An InLinkz Link-up
Posted by Trisha at 9:00 PM