Yay for the first SRC reveal of 2016! Even though we just had a teeny tiny month off from SRC to enjoy the holidays and spend time with family, I must admit I've missed and an am happy to be back in the swing of things. For my first assignment for the year, I had the absolute pleasure of perusing Dorothy's blog, Shockingly Delicious. I was so excited with this assignment. I've been a big admirer of Dorothy's blog ever since I first set eyes on it. She has one of those blogs where you want to make everything you see. Which tells you what a task picking out a recipe for this months reveal was. With great difficulty I finally narrowed my picks down to these beauties - Almond Polenta Cake, Irish Elephant Ears and a delicious looking sesame dressing. Now, those of you who don't know Dorothy, she has also been called the "Pie Lady of Malibu" and with good reason. She has won 23 ribbons at the Malibu Pie Contest in all among other accolades. Check out her award winning recipes here. I have bookmarked her recipe for a pie called The Bob and Andy Pie, a curiously named pie that looks pretty darn good. I was tossing between the pie and her Dutch Baby Oven pancakes and in the end, by a very short margin, the oven baked pancakes won.

Truth be told, I've been waiting for the opportunity to try out the Dutch Baby Oven pancakes and this was the perfect time. I love my pancakes and was eager to check out this version that bakes in the oven and you just cut it up and serve with your favourite things. This time around I had to use fresh berries which are at their prime at the moment. Where do I start with this recipe! It is super simple to put together and the flavour is phenomenal. It is like no other pancake I have tasted. I loved the flavour of the nutmeg and the vanilla in the batter. And do not leave out the fresh fruit. It really adds to the taste and the whole experience. I used fresh berries because they are gorgeous and in season. You could use whatever fruit you like and is in season and I'm sure it will turn out fabulous. Thank you Dorothy for a fantastic recipe!

I halved the recipe and it was pretty good for breakfast for 2. The amounts mentioned below serves 2. 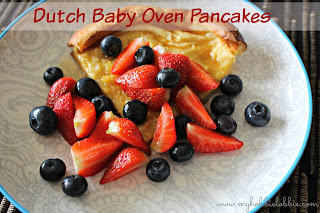 Place an 8" pan in the oven to heat up for about 5 minutes.

Place the butter in the pan and let it melt, till foamy.

In a large mixing bowl, whisk up the eggs, milk, sugar, vanilla, nutmeg and salt.

Add the flour and whisk till combined.

When the butter is foamy, carefully take the pan out of the oven and swirl the butter around to coat the bottom of the pan.

Pour in the pancake batter and bake for 20 minutes.

Sit back and be amazed as the sides rise up first, followed by the centre. This will deflate after you take it out of the oven and cut into it.

Serve up with berries and a drizzle of maple syrup.

I think some good greek yogurt would also do well with fruit or you could stick with some fruit and sprinkle some icing sugar over the top.